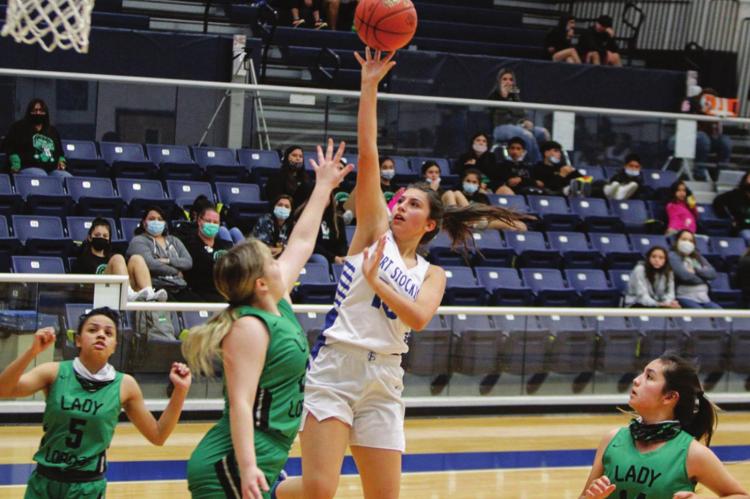 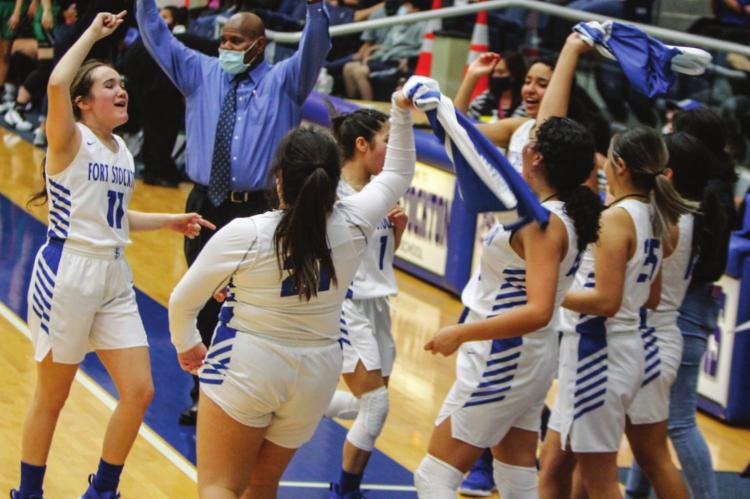 Fort Stockton sophomore Ariel Smith had a coming-out party on the court on Tuesday, Jan. 5 in the Prowlers district-opener against rival Monahans at the Special Events Center.

The 5-foot-8 power forward had her way in the paint for the final three quarters of play after a one-point outing in the first eight minutes of the game. Smith had her best quarter of the season in the second quarter, scoring 10 of her game-high 23 points in Fort Stockton’s 56-48 come-from-behind victory. The 23 points was a career

high and the Prowlers head coach Sherman Chew said her performance on Tuesday was a culmination of hard work and belief in herself paying off.

“She gets better every game. The coaching staff all see it. It’s been a big improvement from where she started. Now, there’s so much she realizes she can do and now she’s trusting herself and doing a great job,” Chew said.

The first quarter far from resembled the final outcome, rather the play that had Fort Stockton on a three-game losing streak coming into the contest. Monahans outscored Chew’s squad 18-6 in the first quarter with 12 of those points being recorded by senior Taryn Griner.

The Prowlers flipped the script in the second quarter to head into halftime down by only one point with the score a 25-24.

Fort Stockton matched that second-quarter effort in the final quarter of play, outscoring the Lady Loboes 23-13 in the last eight minutes of the game to secure the win.

“I think we turned up the intensity (in the fourth quarter) and then I think the girls started believing in the system. They started believing that it will work for what we do. It works and I think that had a lot to do with it. The girls never stopped playing,” Chew said.

The 23-point quarter on Tuesday was the highest scoring quarter of the season for the Prowlers as well as the 56 points scored.

Chew credited part of the offensive success to something him and the coaching staff have been preaching all week – forcing turnovers that translate into easy transition points.

“That was the game plan. That’s what we talked about before the game, at halftime, at practice this week,” Chew said. “We wanted to get transition baskets because they are much easier than set offense baskets.”

Outside of Smith’s career-high performance, six other Prowlers found the bottom of the net. The team’s usual top scorers – Eliana Mata and Alyana Dominguez – tallied a combined 21 points. Dominguez recorded all her team’s 3-pointers, sinking three triples to finish with 12 points.

Fort Stockton improved their record to 4-11 with the win and the Prowlers will play Seminole on Jan. 8 in an away contest. 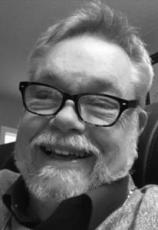 Our purpose should be God’s purpose
Feb 24, 2021 - 15:14
Then I heard the voice of the Lord saying “Whom shall I send? And who will go for us?” And I said, “Here am L Send me!” — Isaiah 6:8 Isaiah has a most remarkable vision described in this passage of scripture. In the vision, Isaiah finds himself in the presence of God seated on his throne with angels whirling about Him overhead.
END_OF_DOCUMENT_TOKEN_TO_BE_REPLACED