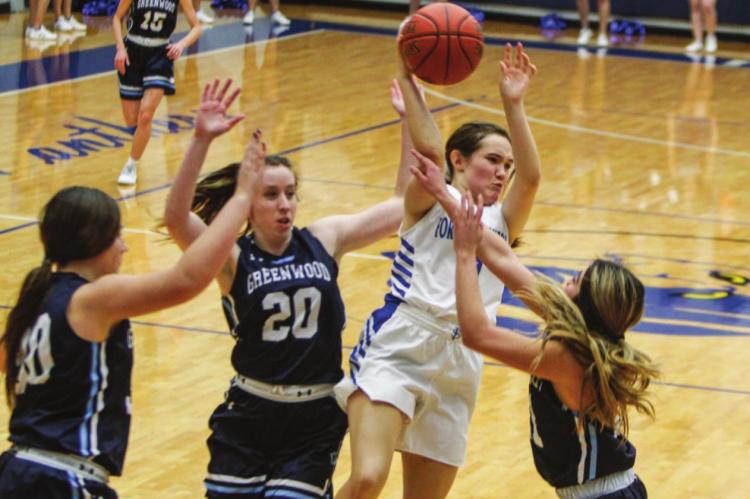 The Fort Stockton girls basketball team showed some resiliency in the second quarter of Tuesday’s game against Greenwood at the Special Events Center on Jan. 12.

The Prowlers were dead even with their district opponent in the second frame as each team scored nine points to close out the first half after a dominant first quarter by the Rangers, who outscored Fort Stockton 21-11 in the first eight minutes of play.

Greenwood quickly regained their first-quarter momentum in the third quarter and continued it the rest of the way in their 66-41 victory.

Karsyn Payton was lethal behind the arch for the Rangers as the junior tallied four 3-pointers - three of those coming in the third quarter - on her way to a gamehigh 17-point night.

Her three 3-pointers in the third quarter helped Greenwood outscore Fort Stockton 24-11 in the first eight minutes of play after half.

Fort Stocicton’s record falls to 4-13 with the loss.

The next district game has been moved to Saturday, Jan. 16 in Andrew. Tip-off is at 2 p.m.

The Prowlers travelled to Seminole to take on the Maidens on Friday, Jan. 8 and fell by the score of 88-24.

Sophomore Brianna Diaz lead the team in scoring with seven points. She had two rebounds and one steal.

“After getting behind early in the game the Prowlers showed no quit and continued to play hard the entire game Fort Stockton coach Breann Sturges said.

Our purpose should be God’s purpose
Feb 24, 2021 - 15:14
Then I heard the voice of the Lord saying “Whom shall I send? And who will go for us?” And I said, “Here am L Send me!” — Isaiah 6:8 Isaiah has a most remarkable vision described in this passage of scripture. In the vision, Isaiah finds himself in the presence of God seated on his throne with angels whirling about Him overhead.
END_OF_DOCUMENT_TOKEN_TO_BE_REPLACED